skip to main | skip to sidebar

The Love of My (Other) Life – Traci L Slatton 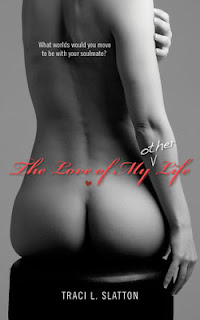 Artist, Tessa Barnum is broke and has the co-op board of her apartment building after her for outstanding payments of maintenance bills which she has let lapse since her husband left her years before. That’s the bad news! The good news is she has started painting again for the first time since the scandal and she really feels with her newly found enthusiasm for her work that she will be able to get herself back on her feet again, pay off her debts and recover from the disgrace she suffered in her past.

As she tries to dodge the rep from the co-op she runs into a unkempt guy who appears to be homeless. She gives him a few dollars to get himself a coffee and he tells her he is from an alternative universe and in his world they are married. Enter, Brian Tennyson. He is undeniably attractive and vaguely familiar to Tessa and through him she finds the path to herself.

This is a lovely story of love and loss, surmounting obstacles, believing in what appears to be unbelievable and taking second chances. Tessa is drawn to Brian and even though, under normal circumstances, she would run a mile from a strange man who appears to be stalking her, she is not one bit afraid of Brian. She trusts him even though she doesn’t know him. As their relationship unfolds it is clear Tessa has many things to come to terms with from her past and so does Brian.

There is a quirky, magical feel to this story and although someone arriving from an alternative universe used to be the stuff of science fiction only, Traci Slatton uses some basic modern scientific principles to make the possibility believable. Having said that, it is very light on the science and very focused on the emotional connection between Tessa and Brian.

The book is a quick read, only 235 pages and I really enjoyed it. Actually, it put me in mind of the film Kate and Leopold with Meg Ryan and Hugh Jackman, so I suppose anyone who enjoyed that film would really like this book.

It was recently published at the end of January and is available from bookstores and online from Amazon.com and Barnes and Noble.

Kim
Hong Kong
The Kim-stillreading blog is book review blog. I read what appeals to me and that's not always the most recently published books. When I land on a book that looks interesting or when I discover a new author, I have been known to buy all their backlist! So, you may find a mixture of books being reviewed on the blog; those that are about to be published; those recently published; those published ages ago and classics! For the You Couldn't Make This Up! blog, it all started with a challenge from a friend who asked me to write for six consecutive days about things I am grateful for. I did that and soon realised there were many more than six things to write about and so I decided to continue the list on this blog. Feel free to tag along with me on my journey as I read and write my way through each day.

On the TBR Pile